Technically speaking, this article is about the Oldest Building in a Melbourne suburb rather than Melbourne's Oldest Building, written by C Mervyn Archdall in September 1947, published in Walkabout | Australian Geographical Magazine.

Situated in the midst of a busy industrial suburb, about four miles, as the crow flies, from the heart of Melbourne, is an old bluestone building known as the Williamstown Stockade.
It was built in the year 1840, and was Melbourne's oldest building until it was demolished in the 1950's.

It was not a very imposing structure, but was substantially built and in a good state of preservation. The only alteration from its original form is that the roof, once thatch, is now iron and has a low wooden tower at the south end. With its strange history it is undoubtedly one of the most interesting old buildings in Australia.

Originally intended as a wool store, it has been in turn a prison, a barracks and a brewery. In the convict days this old building was the scene of many grim episodes. It was here that John Price, from the Norfolk Island penal establishment, was sent to take charge. On March 26, 1857, he was attacked by a working party and so seriously injured that he died very shortly afterwards. For safekeeping, his body was strung up to a rafter in the roof of the Stockade, where it remained until the funeral party was ready to leave the place.

Inside the old place there lingers that unmistakable musty smell peculiar to all ancient buildings, reminding one of visits to the grim dungeons of English castles or the crypts of some old cathedrals. To the right of the heavy door there are solid but well worn stone steps leading to the upper floor, which is supported by great stone pillars. It was to these pillars that the prisoners were chained to receive the punishment of the lash. The original iron bars are still in position at the windows, and the heavy wooden beams and rafters of the roof (including the rafter which once supported the body of John Price) are in a good state of preservation despite the passing of the years.

When the brewery company vacated the premises, some time prior to the war, the old place become deserted and was left to become a haunt of rats and bats. Innumerable sparrows nested in the great mass of ivy covering the southern portion of the building and much of the roof. It was here also that a delicate owl took up his abode, so that, at times, it was possible to see a white ghostly shape flitting silently around the walls in the dusk. What an appropriate setting! Surely no story of an ancient, historic building with grim and ghostly associations would be complete without an owl in the ivy-mantled tower, even in a modern Australian scene!

Despite the passage of time the old bluestone structure still stands firm and solid, almost unchanged in form. But what changes have taken place around it! In the year 1840 it was counted as one of the dozen buildings, including the huts and tents, which then constituted the 'village' of William's Town, at that time the only shipping port for the settlement. The aborigines watched the building of the Stockade from their camps in the sheoak and tea tree thickets; convicts, warders, redcoats and early settlers knew it; pioneers, explorers, seamen of many nations, and, later, the gold seekers of the fifties passed within the shadows of its walls. It was standing in the days when the mud flats at the mouth of the Yarra Yarra were fringed with saltbush and mangroves and the banks of the river clothes with dense scrub and spreading gums. The short journey to Melbourne was not undertaken without some difficulty in those days, for about this time there appeared the following notification in the advertising column of John Pascoe Fawkner's hand written first newspaper:

'The undersigned begs to inform the Public that he keeps a boat and Two Men in readiness for the Purpose of Crossing and re-crossing Passengers between William's Town and the opposite Beach. Partied from Melbourne are requested to raise a Smoke and the Boat will be at their service as soon as Practicable. The least charge is 5/- and 2/- each when the number exceeds Two.'

The undersigned was Captain High McLean. The opposite beach was at that time known as Liardet's, named after Captain Liardet. Later it became Sandridge, and today it is possible for the visitor to see a 'smoke' rising from 'the opposite Beach' as some giant liner commences her long journey overseas from busy Port Melbourne.

During the years the old Stockade, together with its large yard and out-buildings, was taken over as a depot for scrap-iron, and a portion of the premises is now in use as a woodyard. Surely such an historic old building is deserving of a better fate! Situated in Nelson Place, within a stone's throw of the Williamstown Post Office, it is easily located by strangers to the town and might easily be made more attractive to visitors. It should, at least, be preserved as a link with the early days of Settlement in Australia. Green lawns, colourful flower beds and gravel paths could well replace the scattered junk heap, stacks of firewood and ramshackle outbuildings of the yard. The ancient building might well be turned into a maritime museum. There are many interesting relics of the early days of shipping in Hobson's Bay and of the settlement at William's Town which might well be safely housed within the solid bluestone walls of Melbourne's oldest building. 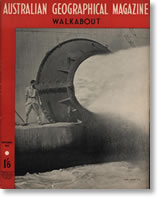 You can also read about the Oldest Building in Melbourne CBD