BIG Things in Melbourne
We love BIG, well there was the movie Big (Tom Hanks), and there is Big M (flavoured milk) and Big Coxy (sorry mate), so when it comes to big things, Victoria is huge!

The Stunned Mullet has lain across the art deco Fish Creek Hotel (or 'Fishy Pub' ) since 1989. 'My barmaid tells people that's where the last high tide got to,' says publican Amy Robson.

When the town of Churchill was established in 1965, the Housing Commission decided it should have a symbol. The result is a 39-metre-high structure of steel, copper and aluminium cladding.

It's known as 'the cigar' because it resembles the stogies smoked by Winston Churchill (for whom the town is named), although its designer has said the resemblance is purely coincidental.

A big wine bottle has stood sentry over Rutherglen since 1900, starting life as the town's main reserve for water (pumped from the Murray River). Just under 36 metres tall, it can be seen from 10 kilometres away.

A big miner seems like a no-brainer for a puttputt park in Ballarat. But when Wayne Johnston designed and built Gold Rush Golf in 2004, he had to fight locals at VCAT for two years to get the giant prospector approved. 'It was all over the papers here,' says Johnston - 'quite the kerfuffle.'

This fibreglass mollusc in Laverton North is said to be one of only two 'rotating' big things in Australia (the other being the world's largest rolling pin, atop Henri's Bakery, Wodonga). Steve Bracks unveiled it in 2001, declaring Victoria the 'abalone capital of the world' .

Standing watch in front of Kate's Cottage - a gift shop and museum to the Kelly gang - the six-metre high, 1.5-tonne , steel-framed fibreglass bushranger was trucked in to Glenrowan in 1992 and has dominated the sleepy streetscape ever since.

John Richmond was Birchip Shire Council president when a big mallee bull was built in 1990 (for $4500) by students at the VCA. 'I remember driving it over the West Gate Bridge to home - everybody thought we were crazy,' he says. Yet one feature has attracted lots of people to stop and take a photo, he says - 'holding the testicles of the mallee bull' .

It's a case of life imitating art. In 1992, the ABC filmed the rural telemovie Eight Ball (about an artist designing a giant cod to become a town's new tourist attraction) and, when the shoot was over, producers donated the 15-metre-long fish to the community. 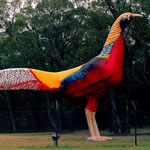 The Big Pheasant, at former pheasant farm Gumbuya Park, is lucky to be standing. Last October, a 23-yearold Poowong man was arrested for having blown the rear off the golden sentinel with an explosive device.

Made of bronze, cold-cast steel and concrete, the 14.9-metre-high koala was created by a Dutch sculptor in 1989. It has featured in the Paul Hogan movie Charlie and Boots, on a Redheads matchbox and on the cover of National Geographic. (It's for sale, too, if you have a spare $700,000.)

According to www.bigthings.com.au, here are Victoria's big things..