The Legendary Corey Worthington
Corey Worthington is the ultimate anti-celebrity. His ascent from suburban party boy to You Tube megastar demonstrated that the young know how to manipulate mass media in ways that leave adults bewildered and floundering in their wake. 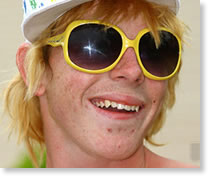 Few would deny that youth is rebellion. Speaking as someone who is on the wrong side of forty, I'm suspicious of teenagers who behave. I look at them askance and think they're up to no good. It's like someone or something has thrown a spanner in their works and stymied the natural exuberance that is theirs for but a brief moment. It's always been the case.

Back 'in the good old days' it was a leather-clad Marlon Brando on a motorbike that ruffled mama and papa's feathers. Today, it's twinks that could have walked off the set of Gus Van Sant's Elephant or Larry Clark's Kids. Given the portrayals these films offer, it's hardly surprising the police at one stage threatened to charge Corey with child pornography. They were grabbing at straws, of course. But my point still stands. When parental backs are turned, kids will do anything, no matter how reckless and foolhardy. Not because they are bad, but because it is their prerogative to test limits. And what after all were Corey and his pals doing, except what comes naturally: partying hard while giving full vent to their testosterone-fueled fantasies of sexual display and whole-sale destruction. It is hypocritical to condemn. Surely the moral crusaders haven't forgotten their own youth, what they got up to and what they would have liked to do when their parents were not keeping guard. Or are these upstanding citizens merely pretending their slate has been wiped clean of the pimply past?

Watching unrepentant bad boy Corey being interviewed by Leila McKinnon on A Current Affair was a television highlight. Aside from its comic value, Corey showed that he had innate understanding of iconic identifiers and their importance to the image-making process. Dressed to thrill, he appeared cloaked in a hooded jacket trimmed with fur, unzipped to display a bare chest and pierced nipples. Oversized yellow sunglasses and a dirty blond fringe masked what remained of his face. It's the kind of casually thrown together attire stylists and celebrities would kill for, but I'd wager that those three elements in his wardrobe took weeks to refine and get right. The fact that he's slotted to appear in a fashion show proves the point.

Aside from his entrepreneurial turn of mind, the thing that impressed about Corey was the way he remained calm and boyishly insouciant throughout the harassment he received from schoolmarm McKinnon. Rather than play up to the camera, he opted for a sly, mocking tone. With his face a blank and attention constantly wandering, he displayed an intriguing detachment. He reminded me of a fawn on the verge of disappearing into the foliage, hiding as much as he revealed. Gently baiting McKinnon, he came out the winner and she the thumping moralist. The more hysterical she became, the more Corey slowed down speech and reduced movement to a minimum. It was a way of maintaining control.

The thing that probably threw McKinnon most was the fact that Corey refused to take responsibility for his actions. He showed not a skerrick of civic duty. While this disturbed me, too, I had to finally admit that at his age I wouldn't have known what those two words meant either. Finally, McKinnon lost it. She demanded Corey remove his eyewear and apologise. In doing so, she subconsciously acknowledged what celebrity watchers instinctively know. Corey had created a persona behind which to hide. The dark glasses favoured by the likes of Paris Hilton are a mask. They create a mystique but they're also a barrier. To remove them is to allow the world in. And what celebrity wants to risk that? The public may get too close and discover that behind the image is a void or a frightened child.

Claiming that his glasses are 'famous', meaning his trade-mark, Corey was right to refuse to take them off. You could almost see the steam coming out of McKinnon's ears. It was a classic showdown, us-against-them moment. The old unnerved by the young as they blithely persist in displaying bum crack and underwear.

In this age of the celebrity who does nothing but simply be, Corey Worthington is a riddle with an answer so obvious few can see it. Complaining adults forget that Corey Worthington is the product of privileged, consumption-driven baby-boomers, who instilled their own questionable values in their offspring. Moreover, baby-boomers produce the reality-television drek that rely on a vast and dedicated teen demographic for survival. It's hardly news that these cancers preach the gospel of the self-centred. They raise unabashed individualism, exhibitionism, high-octane competitiveness and cruelty above other human virtues. Can we be too surprised that Corey is the end result?

When the brouhaha dies down and the world moves on, Corey will be left with the indelible mark of his infamy. He'll probably burn bright for a few years, marry, settled down, have kids and then it will be his turn to wag a finger at the neighbour's kids who play their music loudly at two in the morning. It's the way of the world. To him I say, 'Rejoice, O young man, in thy youth' and let not those who've forgotten what it's like tell you what to do. Just stay away from my neighbourhood, okay?

→ The Biggest Tool in Australia