The Ashes is crickets greatest rivalry, and regarded as the pinacle of cricket, although now a number of sports compete for a ashes series (rugby), but cricket remains the origin of the term The Ashes.

The series is named after a satirical obituary published in a British newspaper, The Sporting Times, in 1882 after a match at the Oval in which Australia beat England on an English ground for the first time.

The mock obituary was written by Reginald Brooks and appeared in The Sporting Times.

In Affectionate Remembrance
of
ENGLISH CRICKET,
which died at the Oval
on
29th AUGUST 1882,
Deeply lamented by a large circle of sorrowing
friends and acquaintances

N.B.-The body will be cremated and the
ashes taken to Australia. 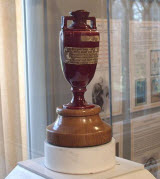 The origin of the term is not disputed but the urn and its contents are in dispute.

The dispute centres around 2 issues:

1. When they were presented and why.
2. The contents of the urn.

Based on a statement by Lord Darnley in 1894, a group of Victorian ladies made the presentation after the Third Test in 1883. The third test was played at the Sydney Cricket Ground, 26-30 January 1883, with England winning by 69 runs.
Source: wikipedia.org

More recent researchers have concluded that the presentation was made after a private cricket match played over Christmas in 1882 when the English team were guests of Sir William Clarke, at his property Rupertswood in Sunbury, Victoria.

The contents of the urn are reported to be the remains of a stump, bail or the outer casing of a ball, but in 1998 Lord Darnley's 82-year-old daughter-in-law said they were the remains of her mother-in-law's veil. During the 2006 Australia tour, a MCC official said the veil legend had been discounted, and it was now 95% certain that the urn contains the ashes of a cricket bail.

On Christmas Eve of 1882, after a congenial lunch, Sir William Clarke suggested a social game between the English Cricket team and a local side, made up largely of Rupertswood staff.

By all accounts, it was an enjoyable game with no one really keeping score, however, it was generally agreed that the English won. Pat Lyons, a worker at "Rupertswood", clearly remembered the afternoon many years later. It was his understanding that Lady Clarke, at dinner that evening, had presented Ivo Bligh with a pottery urn. It was purported to contain the ashes of a burnt bail.

The urn is made of terracotta and is about six inches (150 mm) tall and may originally have been a perfume jar. The Ashes urn has been displayed in the Marylebone Cricket Club Museum at Lord's Lord's Cricket Ground since 1953.

The urn that holds the ashes has never been the 'official trophy' of the Ashes series. The Ashes (term) remains the figurative title of the series without a physical trophy exchanging hands at the end of each series.

The series alternates between the United Kingdom and Australia, with five matches played in each country at a different cricket ground.

In the United Kingdom the grounds include The Oval, Old Trafford, Lord's, Trent Bridge, Headingley and Edgbaston.

The country that wins the most Tests of the series wins the Ashes. In the case of a draw, the country already holding the Ashes retains them.

* series alternates between 18 and 30 months.