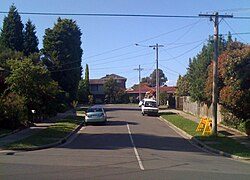 We found this Erinsborough information on wikipedia, and could not help ourselves...

Erinsborough is the fictional suburb in which Neighbours is set.

Neighbours focuses on the domestic and professional lives of the people who live and work in the suburb. Neighbours storylines primarily centre around the residents of Ramsay Street and the other locations within Erinsborough such as Harold's Store, Lassiter's Hotel and Erinsborough High School.

The school and the street were some of the first sets to be seen and used by the characters within the show. The Lassiter's Complex within the town was not featured on-screen until 1986, when Daphne Clarke (Elaine Smith) began working at the Coffee Shop. When other characters began visiting the cafe, they got to know the rest of the complex. Rosemary Daniels (Joy Chambers) used the complex as a base for the Daniels Corporation and a hotel, which used to include a restaurant, a pub and the Lassiter's Lake also began appearing.

There are enough different locations for characters to come into contact with each other daily and enough jobs within the complex to ensure that characters will make each other's acquaintances. The Neighbours sets underwent a makeover in 2010 ahead of the 25th anniversary in March 2011. Bulldozers moved in to the Lassiter's Complex area to begin work. Many of the sets were revamped and there were some new additions.